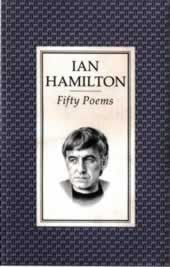 I mentioned Ian Hamilton’s Hull connection last week. He was one of a series of Compton visiting poets who came here in the early 70s, the others being Cecil Day-Lewis, Peter Porter, Richard Murphy and Douglas Dunn who, yes I know, was already here anyway. Here’s Hamilton speaking to Dan Jacobson of his none too successful stint:

I was supposed to sit in an office in [Larkin’s] library, waiting for these young poets to bring me their work so I could appraise it. I think about two people came in the course of the year, with what looked to me like the lyrics of pop songs. And one you pronounced that these weren’t quite up to what they could be, you never saw them again. So there was that side to it. On the other side there was the English Department, which couldn’t understand why money was being spent on somebody sitting around in the library doing next to nothing. [...] The place seemed to be full of time-servers and charlatans of one sort of another, and I just didn’t get on with it, and retreated to my office and waited for the next non-poet to arrive – who never did. In the end I went back to the TLS and wrote an article about it, and made myself even more...

Even more eminent – certainly in Hull. ‘Enemies’ was the word I had in mind.

I’ve tried and failed to track this article down. A little bibliographical ferreting turns up four TLS articles for this period, all called ‘Viewpoint’, and none of them the piece described here. But I now realize I may have misunderstood him to have meant the article as well as its author was in the TLS (Hamilton was working there at the time). Back to the bibliography then. But offers of help also gratefully received.
Posted by puthwuth at 1.6.09