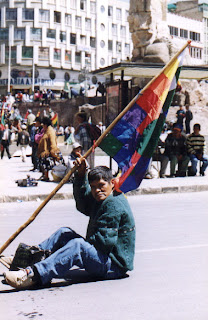 The faded tattoos of the old
native man in the market,

the scratch-mark filigree
of lines round his wife’s eyes.

and Travels with a Capybara,
a volume of humorous verse

by the celebrated author
of The Capybara and I.

The loose-hanging bandanna
round the neck of a young campesino,

the fly swatted away
by a secret policeman
watching me from across the street.

My last appearance
in The Oblivian Monthly Review,

an ode to the motorcycle side-car,
has generated a lively correspondence:

‘Your upstart bard, besotted
with the Judaeo-Masonic
dross of a decadent Europe...’

Death to comma-shirking
free-verse Bolshevist
enemies of the people!

The pompom rear ends
of a clutch of alpacas prancing
down the street,

a mouse tail’s spaghetti
vanishing between the teeth
of the bookshop cat.

and sending the fly out
dawdlingly through
the nearest dirty window.
Posted by puthwuth at 26.3.09

I like this one, more than the fart stuff, and spent twenty five minutes butchering-as-practice.

Did I wish you a happy new year, I think i did, but if not, happy new year. This year is gonna be our year Dave, me you and the ghost of the hermit librarian, whose biography I've just read.

I held off him till now, not through any grand design, just the usual way of instinct deciding what happens, Year eight now Dave. Anruth to Ollamh (i think) it was in the filidh programme.

It's still sinking in, Philip's legacy and how what he left fits in to today's palavar getting rigged up in print.

I knew he was incredibly important, but because of my chips and prejudices against all things as English as what my instinct felt he represented when I hadn't read him, and the intuition had him marked down as a misanthropic Coventry git with his own inferiority raft to sail for Seigas with, I based my imaginary understanding of what he represents, only on the incredibly trite and offensively ill mannered assumptions that got transferred onto him because of my own shortcomings as a human being.

A great read, innit? All that shredding, and still there is enough left for the self-righteous bore to high-horse and damn him with. What a way to go, collapsing in the bog with your gob pressed against the hot pipes and then begging one of the three women you were juggling the Elusian mask with, to shred the diaries. Tragic, but comedy, as the man had a class wit and some marvelous barbic darts, but in the end, an oxo snoot, I fear Dave - or should that be the Muldoonian, I'm afraid.

I picked that up, that comma hanging a bit of verbal class out at the end of the line, when he rejected six of my poems I sent to the New Yorker after a brief meet after a read at the pulpit with Nuala of the mermaids in the Unitarian, the gaffe Woodsie had the All Ireland Dublin leg in on the big day when Deanie and moi met as two plain Achill lads on the nod and wink, the day I bought Fiona a drink, apple juice it was Dave, the day one's work turned life to theatre and i became the very deluded person I am today david.

But Larkin, I always wondered what it was about contemprary poetry being so as it is, and now I know. Philly's legacy, demotic cunt and piss, shit, fuck and bumhole, with a stab at the Yeatsean magi tagged on in there - that nothingness Phil's poetic embodied, but never caught as the Boss did.

Bill was Phils first love, but he never cracked him and moved to Hardy, and then came to hate Yeats, in the way a jilted lover hates their supermodel ex, eternal tears at bedtime when they get into bed with a bread and butter, panhead type of bird. Is that illegal now, bird? The PC hard-stare brigade who worship Larkin might have sumat to say about that Dave.

But I know now why what's getitng raved about and sells, Arm and Duff, do so, I think, because of Phil's gift and I think that's took me to a place I haven't been before, and helped me get a handle on the chaps (coz it mainly is only blokes) who are mad for PL and prject themselves, I suppose, onto his template as a realisable model to aim for. SIx poems a year in a good year, it all makes sense, demotic highblown mix. Now I can get to work.

Anyway, since ingesting the PL brief, I've decided I want to be English and not Irish, because I am English anyway Dave, I mean, who am I trying to kid that I'm not one of her maj's finest layabouts? I want to come back to H and get off the other gear, the pretend paddy stuff that makes me look a dickhead in the village idiot society dave.

I want to apply for the job, stop faking it and ask if I can serve the cause of Her Highness dave. I have always loved my queen, always been a faithful servant, even though i erred and lost my way, but I blame the Wolfetones and Paddy Reilly, and I hereby renounce any claim on wanting to be an Irish bluffer and start taking lessons on how to speak proper, please, dave, your majesty, can you fix it for me to get bendin?

Only larkin abaarrrhhhttt Daithi an chara and forgive the butchery but I was so happy to know the feelings of deep disaffection, hatred and jealousy of anyone who aint me, is a sign of one's poetic good health as an English artist ready to serve Their Majesties

The faded tattoos on old
men in a market,
filigree lines circling
the eyes of their wives,

and, lingering in bookshops
perusing volumes of verse
by a celebrated author -

my last appearance
in Monthly Review.

it ended in an alpacas clutch
prancing down the street,
rattling the dirty window
nearest their teeth

Before roasting a fart first you must catch it.

From Brueghel's bottom I presume

The deaf applauding a hurdy-gurdy,
sheep-fanciers spurning sheep
the idiot heart elsewhere is ours
there where a village’s heart beats

What are you teaching today Dave? What's the schedule? Come on, Szirtes has turned his classroom into top class blather.

What authors are you on, come on, get gassing, please me arl fictional eye witness woven within who'll rock, outpour and apportion in enobling form, myths her chief creators mouth in works of air...arrrghhh.

Sorry dave, i'm getting carried away as one of me pomes popped inter me 'ed (fictional eye witness on) and made it onto here. I am very very sorry for this appalling breach of netequette dave.

But seriously, your site is about the same as mine in terms of traffic, and come to think of it, the time it's been a cherished part of the wider literary village scene. I get 20 a day dave, a solid number, sometoimes as many as forty, FORTY !!! unique visitors a day, and an average stay of 0.00 with a one in eight (being very generous to myself) staying an average of 20 - 30 secs, and the odd marathon of anything from one to a massive 8 whole minutes reading and partaking of the fare.


Don't get me wrong, I have known success and had readers. During my stint as Ovid Yeats on the Guardian books blog in 2007, I set up an ovid yeats blog blog and during its short month long life, was drawing a few hundred a day and each isp was spending five, ten and fifteen minutes there. So I learned, people reading or not reading, especially poetry, is no indication of the quality of what you are writing.


But any stray reader stumbling into here, could not tell what you do, because like me, you are learning, and it is only now mate, eight years in, some very basic and duh ! obvious things are making themselves known, such as - I might know what I am on about as a garble incoherently about my life, but the busy readers who I do not write for, except in the sense that they fulfill some ego function should they read - will not be able to read our minds dave.

So, come on, clever clogs, who yer teachin, hey, hey. You look a bit young for getting lots of lolly to hang around Hull on the sniff for women, I mean men, sorry dave, I mean sexy blokes, athletic, slim, lithe, you know, like me, a gay day in paradise (best way mate, go gay and you'll clean up) -- well that's what I and my embittered student colleagues off the fast track course thought when at thye coal face of education dave, hated all the lecturers, coz we wuz better, just had a few tough breaks and that, wannit?

Szirtes knows the score, get knocking his ideas on blogging and you won't go far wrong. That Trinity wit dave, use it or lose it. What age are you, were you there with Fintan O'Higgins? He did classics and I met in through the poetry. He is also a scriptwriter currently bringing theatre to the East Midlands and a great craic, unless you knew him and thought he was a twat and if so, then of course, of course I agree..ha ha


So, come on dave, lets have a go at chatting literary stuff, who are you teaching this semester, what classes and is it true that you have got Larkin's missing diaries, the ones that weren't shredded?