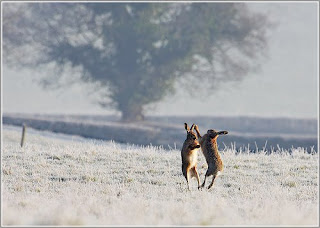 (from Seamus Heaney’s version of the Middle English poem, ‘The Names of the Hare’)

Myles na gCopaleen once suggested that a Tomb of the Unknown Gurrier could be erected on Dublin’s O’Connell Street, and watching the flatlands of the Humber estuary flash past from a train window the other day I thought of the equal desirability of a Tomb of the Unknown Giorria (giorria = Irish for hare). There they were, in white-arsed profusion, loping and lolloping round the fields, even if I didn’t quite get to see any boxing (above fine photo of which found here).

Peter Didsbury once told me of his desire to edit an anthology of poems about hares. He was describing his hare fixation to someone in Sweden once, when a hare stepped out in front of him, in the snow on the city street. Didsbury readers will remember the reference to Cowper’s hares (Tiney, Puss and Bess) in ‘Eikon Basilike’, while ‘Hare’s Run’ (also from The Classical Farm) collates some toothsome leporine lore: ‘Hare ran on mountain, /disclosed the boundless accidental /graces of his running.’

In between gazing out the train window I was reading R.F. Langley’s (highly recommended) Journals, in which I find the following:

Hares play. They leap up. Leaping up in the essence of opening. ‘Open’ and ‘up’ are the same word. Intuition is a hare. It brings its transformations, making the rationally impossible happen, startling in its appearance. John Layard said so. These did seem large, ready to unleash themselves if it seemed to them the thing to do, touched up bravely with black and white, and truly remarkable for length of back leg. They are supposed to enjoy being hunted, even if there could scarcely be a more obvious piece of wishful thinking. These were flaunting themselves while pretending not to see us, as the four of us walked up the middle of the field, talking.

And then ponder Yeats’s ‘Memory’, with its serendipitous exploitation of the fact that a hare’s lair is called a form:

One had a lovely face,
And two or three had charm,
But charm and face were in vain
Because the mountain grass
Cannot but keep the form
Where the mountain hare has lain.

But why ‘cannot but’? It would be understandable if the grass couldn’t keep these transient forms, but the fact that it does somehow makes ‘charm’ and ‘face’ all the more poignant, in a very Yeatsian way.

I for one would stump up cash in advance for an anthology of poems about hares. And how better to pay it for than in Yeatsian Free State Irish thrupenny bits, like these: 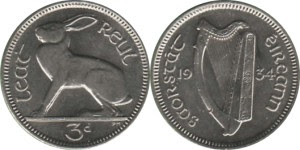 to go into the hare gets you muckle sorrow

Love those old animal coins. Did you see the designs that didn't make it? More animated; the bull about to charge, the hare sitting up on its hind legs:

Hugh Dunkerley read a fine poem for his partner Bethan Roberts (a novelist) at a Limerick festival in 2007. The poem was based on the conceit of the woman like an escaping hare during lovemaking.
We have hares in our garden here in Mayo; the form is thirty metres from the living room window.

Hares are cool.Only ever seen one once but it was pure magic.Anthology of hare poems is a great idea,how about 'The Lamass hireling' by Ian Duhig?