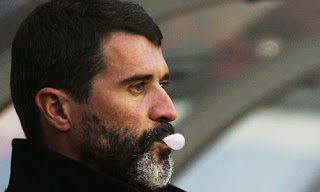 The rags are saying the players were celbrating Dave. That Keaono ruled by fear, like some anicent Eoghanochta Ard Ri, Wearside his soccer fiefdom, and now, all his big talk, dissolved by a text message, just switched off and buroed his head in the sand.

He was commuting by helicopter by the end, and after the final drubbing, he was never seen again, ran back to his family and stayed there, a family man at heart, only wanting to walk Trigger, go the pictures with the kids, an act Dave.

Dunphy will be crowing on the next show, feeling good his little bit of negativity, helped topple him. He'll give a thorough autoposy, casting himself as Eamon the Wise, Eamon the Sage, and Roy a little boy who has seriously damaged his adult credentials, like a young kid whose gob ran away bwith itself and now, talked his way into wearing a mask by playing a game, which he lost Dave, Keano lost, Roy the runner-away from the mountain, back to Theresa.

It makes me feel warm, good, not so bitter that it could have been me as successful as Roy, if things had been different - if an uncorrupt judge had not marked my English Lit O'Level a U, if i would have got an A, like i should have done if natural law was done. And now Dave, gawd knows where I would be. Not in this bedsit, not a professional hater filoled with envy, facing down middle horrible and twisted by the british, by the welsh, by the scottish, by the prods, the fenians, the filth, the scum, the chavs, the bottle outers, the TD's, the MP's Tony Blair, Bertie, Mandleson, Bush, all them bastards Dave, the official legislators denyong me the right to riches beyond my wildest dreams, the muslims, the jews, the christians, the bhuddists, sikhs, Freddie Mercury, Joan Littlewood, Behan, Yeats, you Dave, Cliff, Cliff's boyfriend, my boyfriend, your cat, all them bastards dave, every single one of them, it's their fault i'm not Richard Harris, Colin Farrell, John Travolta, a scientoligist at theta level auditing for the Fed, the AIB, the BBC, CNN, ABC, RTE, but most of all, Heaney Dave, and Muldoon, and Kennelly, and Durcan and Mehan and Boland and all the rest of them Irish fakes, fakin they are Irish, not like me, not like me Dave. I'm the real Irish, i can't speak my language coz of the brits, them british bastards dave, it's there fault i'm in a kip, them british gits fault i never went to Hollywood, all of them brits, and the welsh, and the scottish and the fake four million irish on the island, my island dave, the earl of desmonds ireland, more irish than the irish, that's me dave, not you, not Biffo, me!!

Roy's sideline contest with Dean Windass will be worth watching, and with Windass already on a yellow after his attempts to foil Dealp's long throw in the game with Stoke, Roy should have an advantage to chew on this time.