The Lifelong Habit of Breathing In And Out 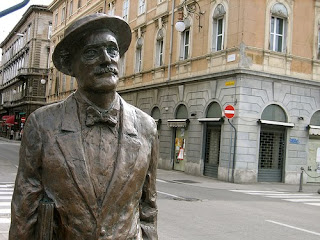 Very cheering to find Adam Mars-Jones’ review of Gordon Bowker’s new biography of James Joyce in The Observer yesterday, as I travelled back from Ah-Trieste-ate-I-my-liver and the Joyce school there. Even with that link, the corkers in AMJ’s review are too good not to reproduce here. It would seem Bowker does a good line in historical scene-setting flannel:

‘For the British Empire, as 1882 dawned, it was business as usual. Queen Victoria... had ruled her domain for 45 years, and would reign for a further 19.’ Perhaps there was some sort of floral clock arrangement in public parks, displaying a countdown, so as to keep citizens properly informed of their future.

‘John's habit of regular long walks around Dublin and environs, caught by his children, foreshadows the wandering narrative line which snakes through most of his son's fiction.’ It's hard to see how it would be possible to go further in this vein. Perhaps: his father's lifelong habit of breathing in and out, in strict alternation, instilled in the young Joyce an abiding interest in rhythm and pattern...

I always dislike the word ‘academic’ as a term of abuse, e.g. in the (inexplicable to me) way that some people spurn James Knowlson’s biography of Beckett in favour of Anthony Cronin’s skimpy and under-researched effort. I say this not because I work in a university, but because getting things right is absolutely not the preserve or the exclusive duty of academics. It is a prerequisite for writing a book about anything, whether James Joyce or the reproductive life of the blue-footed booby.
Bowker’s book though seems to have the intellectual credentials of a Daily Mail weekend supplement article subbed on his iphone by a books editor on holiday in the South of France. I suppose the good thing about the whole saga is that no publisher can point to it as a good reason for turning away a genuine scholar who did fancy writing a proper follow-up to Ellmann’s book. Really though, does Joyce not deserve better?
Posted by puthwuth at 4.7.11

Apart from the passages pinched from Adam Mars-Jones this commentator's own contribution is quite false and a complete misrepresentation.

Viz.'But in Bowker this correction has now been overturned and the hospitalisation theory reinstated. Bowker also describes John Henry Newman opening the University of Ireland in 1850 and welcoming as one of his first students Daniel O’Connell.'

Anonymous, who's arsed what fucking pub this fictional hoo ha's set in, hey? Not fucking me, coz I am abso-fucking-lootley anti-fucking-aca-fucking-demic, you anonymous cunt.

If you had the courage to speak as yourself instead of hiding behind a piss-poor tenor in a shit lame voice, maybe then we'd be having a fucking conversation that consisted more of just me calling you a cunt, you fucking cunt!!

Wake up, dickhead, and talk about what was really important to Joyce the man, the flesh and piss and shit and farting fuckingh genius that got birthed arse-first (I bet you never fucking knew that) in the city of filfth and lies, saints and drug crime, brassers and bullshit, a thousand broken bastards bawling at the moon, and you, you fucking anonymous cunt.

Tell a fucking knob joke, swear, be like me, another anonymous cunt hiding behind a shit tenor in a crap voice. Then, then, as Bono's arl fella used to say to the shaded magus who makes James Joyce look like a fucking ant, we can fucking talk, sonny..