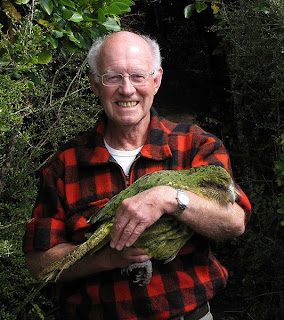 As feats of conservation go, Don Merton’s is surely unique: he saved a species, the Chatham Island black robin, whose numbers had fallen to a single surviving breeding female. For more on how he did this see here. He was also at the centre of kakapo-conservation, a project that involved transporting that species en masse to the predator-free islands where they now live, and where their numbers have steadily risen. The bird in the photograph here is Richard Henry kakapo, the only surviving mainland Fiordland bird when he was discovered in 1985, and who was believed to be between 80 and 100 years old when he died recently. A one-minute’s skraark! of tribute, please, from any flightless parrots reading this.
Posted by puthwuth at 4.5.11

Nice article ,thanks for the information.

If you haven't done so already- look up Stephen Fry 'Last chance to see- Kakapo' on youtube.....(have a pair of dry clean pants ready).
http://www.youtube.com/watch?v=9T1vfsHYiKY