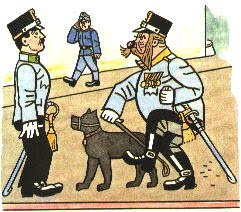 Speaking of eminent boobies, let me mention much against my better judgement the following letter by Irish poet Fred Johnston that appeared in last Sunday (June 13)’s Independent on Sunday:

It was heartening to read the letter (6 June) signed by eminent writers such as John Berger, Thomas Pakenham and others, urging an academic and cultural boycott of Israel. Doubly heartening to read that there is an organisation such as British Writers in Support of Palestine.

As an Irish writer, I have been vilified and insulted here in the Irish Republic when I have suggested, in letters or in online forums, that our writers and academics should make some kind of statement condemning Israeli action against the Palestinians and, more recently, the murder of nine Turkish citizens by Israeli forces on a Gaza relief ship. I have been publicly accused of attempting to ‘bully’ writers into making such statements. I have also asked Poetry Ireland, The Irish Writers’ Union and Aosdána (the Irish academy) to make a comment on recent events and have received neither reply to nor acknowledgement of my request.

I feel deeply ashamed that so many Irish writers seem quite terrified, and even angry, at being asked to make a public statement against such inhumanity as is practised by Israel upon the inhabitants of Gaza and the criminal arrogance that permits her armed forces to commit murder on the high seas. I fear something has died in the cultural soul of Ireland and will not be revived.

As I am the person he means when he describes being called a ‘bully’ for oh-god-not-again trotting out this party-trick (I used the phrase ‘playground bully’ to him in exasperation on facebook, and was rewarded for my trouble with a threatened lawsuit!), let me summarise in words of as few syllables as possible my feelings on the political stance he takes in the above letter.

Fred Johnston has now spent several decades responding to this, that, and the other thing he has seen on the Six One news or read about in The Galway Advertiser in the following manner: he writes a letter to The Irish Times or wherever (latterly his facebook status updates have been his pulpit of choice) accusing other Irish writers of not being political. Of not being political like he is, in the sense, presumably, of writing letters to The Irish Times. Letters in which, presumably, they could attack the other Irish writers who have yet to write letters to The Irish Times accusing other Irish writers of etc etc etc. This is not a serious political stance. It is self-righteousness. It is moral superiority of the most pharisaical kind. I’m sorry (well, in fact I’m not), but I cannot take his views on Palestine or anything else political seriously, because I do not believe Palestine or whatever is the real issue. The issue is self-image and stone-throwing. He appears to believe that ‘being political’ is in itself a virtue, as though the political views of Ezra Pound, Knut Hamsun or Céline, were also brave acts of resistance to the cowardly refusal of whoever was refusing to write to The Irish Times in the 1930s. If I worked for any of the organisations he names above, I would put his letters in the same place reserved for people who write in with their theories about moon landings and fluorine in tap-water, i.e. the bin. Give it a rest, Fred Johnston. You are an almighty bully of humility. This is a literary reference. It is drawn from a novel by Charles Dickens. And finally, you are also a complete waste of everyone’s time. For the love of The Galway Advertiser, desist. This is not a subject I hope to revisit, ever.

I would also add that anyone who infers from the above that I, too, am not capable of being disgusted by Israel’s treatment of the Palestinians, or doing something about it politically, is no less an eminent booby than Mr Johnston. My or your political views are not the issue here. The issue is political good faith, and the belief that writers are to be cattle-prodded by holier-than-thou lectures into toeing someone else’s party line. And I would invite letter-writers and other public nuisances who do believe in this kind cattle-prodding, most respectfully, to sod off.
Posted by puthwuth at 17.6.10

"the belief that writers are to be cattle-prodded by holier-than-thou lectures into towing someone else’s party line."

Actually, they try to make writers toe the party line. They expect people to walk along it, not pull it.

OMG yes, I wrote 'towing'! You are more than right to make hay with that one. Corrected as of now.

It has been said that the worst offence you can give someone is indifference.

The fact that he, repeatedly, appears to 'get your goat' on a variety of issues means that whatever he does or says, indeed, matters to you. Is the real issue here that you do not want to feel pressure? Pressure to act in a way that you feel, or assume you are being advised to, by this individual, in front of your peers?

People write into newspapers to vent their spleen on whatever the topic du jour is. It's almost tradition. As is the right for people to ignore it, feel moved by it or simply laugh at the stupidity of it.

His words do not carry power (evidenced perhaps by the number of Irish writers who have taken up the call to arms, or not?) but your retort gives them strength. Allows him, like a 5 year-old, to rally loudly against his oppressor and feel vindicated that he does have a right to carry on his crusade.

The sign of a leader is to once in a while turn around and see who is following. I suspect its lonely out there in front for your nemesis!

That's 'Moeurs Contemporains', right? Or do I mean George Costanza?

I don't in the least mind feeling pressure. Consider Yeats and politics, to compare small things (
myself) and great for a moment. Why did he allow himself to be dragged into political and journalistic scraps that so obviously exasperated him? Why else than because he needed, on some level, to be goaded into poetry by its opposite? 'The opinionated man is the ignorant man', but there is something brutally fascinating about the spectacle of paraded ignorance, my own included.

Having confronted it and done one's bout of playground scrapping, it becomes a pleasure to return to the thing itself, soiled and refreshed, safely inoculated for a time at least against all that fiddle.

It is indeed 'Moeurs Contemporains'. Someone a very long time ago advised me that the postal service was possibly tampered with on receipt and thus, nothing was the be written on the outside of the envelope for fear of being found out!