A Memory of Michael Donaghy 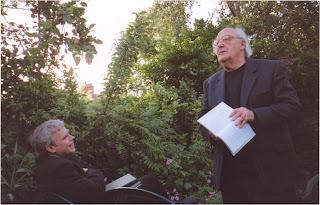 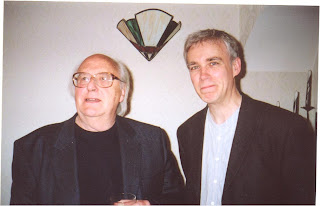 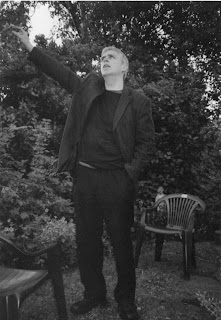 Readers of Zadie Smith’s The Autograph Man may recall a long and rambling joke about a theological debate between the Pope and the chief Rabbi, which ends with the Pope believing he has routed the Rabbi by showing him some bread and wine as a sign of Christ’s forgiveness, while in the other corner the Rabbi explains ‘Then we broke for lunch’. I first heard this joke, and maybe Zadie Smith did too, from Michael Donaghy. The occasion, for me, was after a reading he gave with Roy Fisher in Jean Hartley’s back garden in Victoria Avenue, Hull, in July 2004. In another back garden, Angela Leighton’s this time, Michael explained to me that he had been taken ill recently in the States, and had had his gall bladder removed. Within two months, he died suddenly.

He’d been coming to Hull quite a bit, since I moved here in 2000. The first time I heard him read, before we’d actually met, he explained to the audience that one of the advantages of reciting his work from memory was that no one noticed when he made a mistake – except you David, he added, pointing at me. I’d recently mentioned in a review of Conjure that the Latin at the end of ‘Quease’ (‘Absolvum te’) was wrong. The next time we met he told me he’d changed the line, and showed it to me in the new edition of the book. I seem to remember him having replaced the Latin altogether, but looking the poem up in his just-out Collected Poems I see the phrase now reads ‘Absolvum te [sic].

The jumper outdoors MD is wearing above was borrowed on the day from John Osborne, I believe.

And as I was typing this The Shape of the Dance: Essays, Interviews and Digressions came through the letter box, a book I’m pleased to see contains MD’s interview with Conor O’Callaghan, first published in Metre in 1997. Given my now well-established role monkeying around on the margins on MD’s texts, I remember puzzling over an extract from this interview we had selected to go on the back of the mag. Charles Olson was a ‘virtuous typist’? How exactly? The word, as I realized just in time, was ‘virtuoso’.

The one signed MD book I have is my copy of Conjure from that first meeting. MD inscribed it ‘Ego te Absolvo!’
Posted by puthwuth at 6.3.09

Picador publishes Michael Donaghy’s Collected Poems and his prose writings, The Shape of the Dance, this month. Please join us at the Southbank Centre this Saturday where we will be celebrating with two events.For details of how you can get 50% discount visit the Picador blog. http://tinyurl.com/c8trlh