The Treasures of a Folklore Beyond Compare 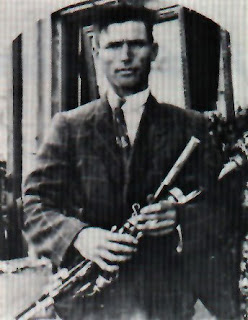 As a child I would perch in the tree-house and dream of scaling the tower on the mysterious German’s land behind the estate. As a teenager my one desire was to play the pipes like Johnny Doran. Now my music has been and gone and my palms fall useless against my thighs.

The town of Rathnew is an unremarkable town, with its Wimpy bar and plaster Madonna, but here rests Doran, king of the travelling pipers, one chanter’s toss from the Wicklow bus and its godawful radio station.

Among the most important effects on the pipes is the contrast between C natural and C sharp, as featured in so many piping tunes, Doran’s version of ‘Rakish Paddy’ for one. Consider how differently he does it on his two recordings of that track, working the regulators each time like a pack of hounds on the chanter’s trail.

At the time, forty years on, John Kelly, who duets with Doran on ‘Tarbolton’ and ‘The Fermoy Lasses’, still kept shop on Capel Street, and kept his fiddle under the counter. His fiddler’s brow: sloped, confidingly, over the counter, through the window, as I walked by.

Some pipers play open, some closed. Doran played open. I prefer closed, but prefer Doran’s open to any good reasons why I might prefer closed.

One thinks of Robert Johnson

Hoist that chanter off the knee for those low Ds and Es, let the fox bark all it wants!

Pipeless today, I look up as the bus passes the cemetery and wonder where I have buried my music.

How I dreamed, as a child, of the tower on the mysterious German’s land behind the estate.
Posted by puthwuth at 16.9.08

Labels: In Memory of the N11