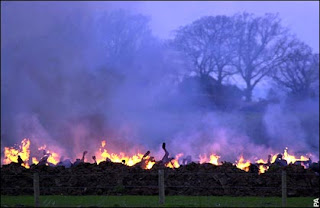 It's a long way from James Herriot's deep concern for all involved, that's for sure.

Loads of urban British subscribers to the BBC news website can't fathom why anyone cares "when it's endemic in other foreign places and why can't we just ..." vaccinate or shoot scientists? Eh?
By which they mean, why does the rest of the EU boycott diseased meat and treat it as an undesirable commodity? Baffling, James, truly bizarre.

Mind you, they can't spell very well either, but sure that's foreigners for you all over : )