A poster on twentymajor's comments stream mentions that a caller to Joe Duffy or some other anencephaly-inducing Irish talk radio show remembers being in 'the same position' as the teenager currently being prevented from travelling to Britain to abort her anencephalic foetus. The child was born anyway and recently 'did quite well' in its Junior Cert.
It's a no-brainer, don't you think.
Anencephalics or outright acephalics have a bad reputation, it has to be said. Poundian favourite Bertrand de Born was one. He turns up in the Inferno carrying his head as a lantern, as his punishment for being a sower of discord. Though to be strictly accurate his head was still attached when he was going around making a nuisance of himself.
Still, anencephalics and acephalics: don't trust them. Hard to make eye contact with too, which doesn't exactly help when it comes to building up a rapport. There is a scene in a Will Self novel where someone decapitates a trump and has sex with the neck-stump (safe or unsafe sex? I forget.) That's not what you want to see on the train home from work, consenting or not.
I make an exception for Mike the headless chicken from Fruita, Colorado, who always struck me as friendly, harmless chap. None of this monkeying around with the constitution and distressing
teenage girls for him. Would have walked the Junior Cert too, if only he'd got the chance. 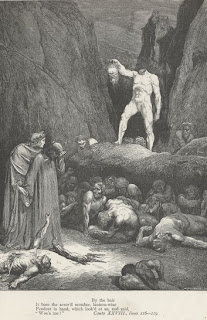