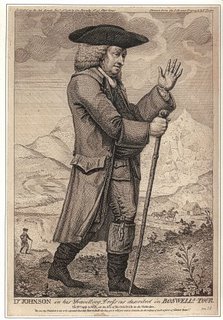 An orgasm is a ‘sudden vehemence’. Or at least according to Dr Johnson’s dictionary it is.

A jobbernowl is a ‘blockish or stupid head’.

A urinator is ‘one who searches underwater’.

A fireman is ‘a man of violent passions’.

A sausage is… don’t ask him that one. We’ve all seen that episode of Blackadder.

There’s an entry, if not for sausage, for ‘sausage poisoning’ in Ackerley and Gontarksi’s new Faber Companion to Samuel Beckett (Unnamable, family death from), a mighty and impressive tome.

However, its existence undeniably raises the bar for my Beckett facts. I’ll have to discover my inner fireman and turn urinator if necessary in search of new material, or go down as an ignominious jobbernowl.

'Doch doch I assure thee', as Beckett himself might put it (and does in 'Enueg II').

(Doch is a contradictory affirmative, much like si in French, and as the Human Wishes notebooks show, it's a tic he picked up from Johnson, who Boswell reports was in the habit of introducing statements of agreement with the word 'No'.)
Posted by puthwuth at 25.4.06

Hi Percy. Here's a possible candidate for your post-Faber Companion Beckett facts: Molloy is kept by a woman called Lousse. A possible origin for this name is in Munster folklore: a she-devil called Petticoat Loose/Lousse, the posthumous form of a woman of ill-repute. For more on Petticoat Loose, see Anne O'Connor's recent book, The Blessed and the Damned: Sinful Women and Unbaptised Children in Irish Folklore.