Poetry Does Not Matter 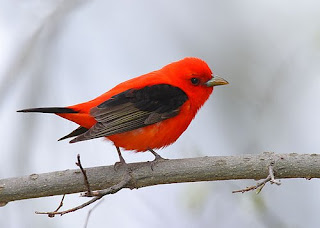 Harry Clifton on Jay Parini’s Why Poetry Matters in today’s Irish Times, or rather on why poetry may not matter, to poets:

The fact is that the best poets are not themselves poetry enthusiasts and never were. If anything, they were dragged against their better judgment and only in response to some deep necessity into this ambivalent realm, and have done, and are doing, everything in their power to resist it. It is the little figures, their impulse too slight to constitute a threat either to themselves or anyone else, let alone Plato, who are forever trilling on about the wonderfulness of the art. The ideal republic (probably a deterministic hell, if the truth were told) has little to fear from Louise Glück or Richard Eberhart.

John Latta mentioned Point Pelee the other day, and I thought I might gratuitously avail of this post to use a picture of a scarlet tanager seen there and found (the picture) here. Wow!