Hull City Win Relegation from the Premier League, May 2009 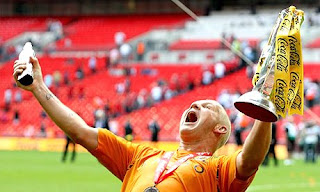 Better, however, to have loved... and the rest.

Stoke and Hull in the Premier. There is life on earth after all.

Man Utd do the (proper) double, Hull City go up, Arsenal come third after one of the most hilarious bottle jobs in history, Man City get some fruit and nut bar in charge, Chelsea are stupid enough to sack Mourinho and replace him with a man whose face personifies the word 'gobble' (and, we must never forget, whose wife drinks piss: http://www.dailymail.co.uk/news/article-483383/New-Chelsea-managers-wife-drank-urine-live-TV.html).

And, to cap it all off, Donny beat the scum of the earth, Leeds United, consigning them to another year of pouting in League One.

This has been the perfect season.

Fourth is the new first.

Yes, and the tiger is the new ram.

Further reasons this season was perfect: Celtic won the SPL and England spectacularly failed to qualify for Euro 2008.