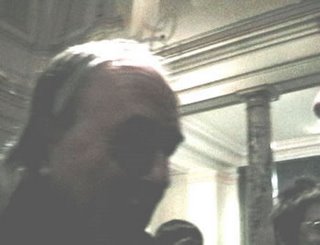 Gordon Burn on poetry goings-on in Sparty Lea, Northumberland, 1967: 'One thing at least is beyond dispute: after the Cambridge Marxist-obscurantist poet Jeremy Prynne told the Newcastle poet Tom Pickard to keep his young son quiet during a reading, Pickard went outside and smashed his Land Rover into Prynne's half-timbered Morris Oxford saloon. "I reckon it was about here," Pickard, who still lives locally, said last week. [...] "I drove to the top of the hill, went down into second, slammed on the brakes and sledged into him."
Posted by puthwuth at 26.8.06