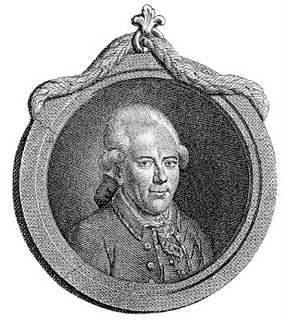 Georg Christoph Lichtenberg, master aphorist, and my nomination for the sanest of all authors.

Wrote a satirical attack on Voss’s theories on the pronunciation of ancient Greek, and on Lavater’s pseudo-science of physiognomy.

Proposed the standardized paper system that gave us the A4.

Has a crater on the moon named after him.

Discovered ‘Lichtenberg figures’, the patterns formed when a powder is dusted on a plate on nonconducting matrial that bears an unevenly distributed electrical charge. And very pretty patterns they are too.

Almost launched the first ever hydrogen balloon, but procrastinator that he was, never got round to it.

‘He marvelled at the fact that cats had two holes cut in their fur at precisely the spot where their eyes were.’
Posted by puthwuth at 28.5.06