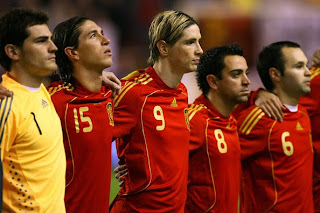 Arizona sheriff patrolling half-way line against vague possibility of USA-Mexico tie, has ‘ways’ of dealing with ‘you folks’ back home.

FIFA cave in to Irish demands, force Thierry Henry to celebrate all goals with half-hearted somersault and give post-match interview in Tallaght accent, and enough already, you big cry-babies.

Nigerian fan in crowd’s skin actually is green, is jumping up and down in spasms of embarrassment.

Neo-fascist-garbage-spouting, heavily-tattooed Italian has something very, very important to say to his mother/that model he’s banging.

Seventy-two per cent of Brazilian breasts now swaying in time to Kaka’s dinking runs on goal.

‘He knows what it means to them’, commentator says of robotic Swedish playboy mercenary Sven Goran Eriksson as he completes ‘lucky’ glasses-adjusting routine during Ivory Coast national anthem.

Middlesborough/Stoke/whoever fans will ‘need no reminding of’/‘know all about’ some Honduran/Greek/Slovenian who was useless on the wing for them before he got sold/put down, whenever that was, isn’t Harry Hill on ITV now?

Drinking carpet cleaner/stabbing self in eye suddenly more attractive than listening to Alan Shearer’s explanation of ‘previous’ to Uruguay-Denmark ‘grudge’ match ONE SECOND LONGER.
Posted by puthwuth at 10.6.10

I used to watch a lorra soccer back in the day Dave, when I was a Liverpool supporter who'd turned coats from the toffes, aged six, because the blues never won owt and LFC were numero uno mo chara.

I'd been told to support Everton by my dad, just because my great uncle Martin Masterson, an Achill native settled in Tuebrook, was a season ticket holder at Goodison Park.

Was it wrong of me to break this covenant, Dave?

I don't think so. And neither do I think it in any way wrong to have stopped suporting Liverpool as a soccer purest, eight years after they failed and let me down in my capacity as an armchair fan who watched them on telly only: turning instead to watching Man U, around 1996, once it was clear Liverpool were not experiencing a blip, but a slow decline, and Man U had become the team I loved as 'Liverpool', when a kid.

Seven long years I wasted before transferring allegiance at 29, to the reds in Manchester; just like I ransferred my loyalties from Everton twenty three years earlier, to the reds, within weeks of making that solemn vow I would be a life long blues fan.

The only games of soccer I got to experience live, was after I moved to the Iveagh homeless hostel in Dublin after finishing uni, and got a number stewarding at Lansdowne until it closed down, watching one of my home teams, the brave and graceful lads in green, enact a comedy of errors under Stan, winning when it didn't count.

The best, most sporting and exciting match I witnessed at Lansdowne, was when we stuffed Sweden three nothing. Stan's very first match as manager. Like Keano he was that night, all silent, in control, just by turning up we won. Then, it all turned to shit and ended with a drunk pulling a plastic gun on him outside the team hotel in Portmarnock - and the infamous press conference the following day, where Stan displaced all into a towering display of Louth emotion about his mum and dad getting dragged into things; by the Media; as if - like, we give a fuck.

We just wanna win games. Be a winnner. It's all very simple.

That's why I was supporting Inter Milan, and Chelsea this year, to cut out the, frankly, daft tribalism that says you have to stick to the one team. Why?

It's like only buying one poet's books, when they might only have one decent title in them. We don't do it with them, so why with soccer teams?

I want Brazil to win, or Italy, or Germany, or France, or whoever plays like the Liverpool used to under Shanks and Paisley, like Man U have under Fergie, Newcastle under Keegan, the old heroic spirit of ancient Greece, win lose or draw, just give it your all, like we did at Stan's first match - another story all together.

As England exit World Cup, Adrian Chiles explains why the Baggies should really have been sent to SA, as their stadium is the only one in England at altitude.

Pretty sure you can watch RTE live on the internet if you want to see Dunphy and co. Shearer is a hard man to listen to

Adidas engineers, at a secret bunker outside Hannover, celebrate the first triumph of their new ball, as it deceives England's goalkeeper, Robert Green.