Writing, Being a Writer 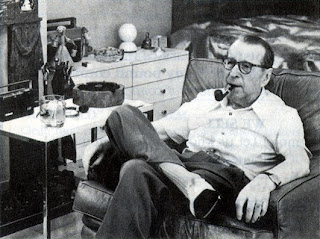 When T.S. Eliot met the young Stephen Spender, who told him he wanted to be a writer, Eliot ticked him off, saying he could understand somebody wanting to write poetry but not the desire to ‘be’ a poet. I am reminded of the New Yorker cartoon of two women talking, one of them telling the other ‘My husband’s like Tolstoy. Except he doesn’t write.’ I too have never understood people who say they want to ‘be’ writers. Writing is an activity, not a state of being, like simply being a princess or an Indian holy man. I’m reminded of all this by seeing Sean O’Brien (not someone all of whose opinions I am likely to share...) announce in the current issue of Poetry Review that:

The preoccupation with ‘being a poet’ is part of the contemporary fetish with ‘creativity’, whereby an attitude and an identity as part of a scene are assumed to be the real thing, rather than the thing itself.

When in old age Georges Simenon stopped writing novels, he changed his passport to read sans profession. Write or don’t write, but don’t go around wanting to ‘be’ a writer. Or if you do, keep it to yourself, world. And so endeth the lesson for the day.
Posted by puthwuth at 30.6.10

About 1928, in one of the three genuinely funny jokes that Punch has produced since the Great War, an intolerable youth is pictured informing his aunt that he intends to 'write'. 'And what are you going to write about, dear?' asks the aunt. 'My dear aunt,' says the youth crushingly, 'one doesn't write about anything, one just writes.'
from Orwell's Inside the Whale.

I think bohemia has got something to do with this, encouraging people to be flaneurs. "Being' a poet seems like an enviable occupation, where you can just walk about the place twirling your cane. The odd haiku then is enough to keep your had in, and legitimate the cane-twirling.

Writers can be divided into three categories according to their ambitions:

1. Those who want their books to become bestsellers and bring untold riches and fame.

2. Those who want glowing reviews in the broadsheets and to live in squalor in some bohemian part of town.

3. Those who write exclusively on the inside of public toilet doors, and generally want their readers to call a particular number for sex.

Only the third category deserve any respect.