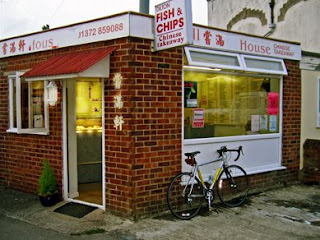 ‘Pictures are illustrations only’ (on Chinese takeaway menu).

Madam,
Referring to Clifford Coonan's "Beijing letter" I also collected
examples of Chinglish in China this summer. In a restaurant in
Shanghai you could order "old duck of casserole" and "wring of fruit
juice". My box of green tea lists the following properties: "It can
live, increase the blood and recover the dint strong". And in a park
in Xi'an the following sign: "The grass longs to grow up strong and
healthy".
Yours, etc.
Jessica Lysaght

This is the sort of image one can get worked up about W: swift lines, all detail, wonderful marvel, and two wheeled ship of raver, unlocked by the looks of it, perfect opportunity for an honest con, two chips and curry, a sausage dinner perhaps, a picture purchased, no one wld know about it, a re-spray, ad in the local rag, bingo, fifty quid for the pavillion and a chap well fitted out with the real Swift and three times fifty swans, yeah, very impressive, the chinese glyohs, yes, yes, Noh art as himself practiced it, signing on and drawing a check lit of the sum list opf event occurring, static as it gets, resting erect and proud, a metal ally in times of swift escape with the most expensive feast sold, unpaid for and folk, off out of it, straight down the jigger (if there is one) to the cabra Kebabra chain of native ten meat and no veg, chevron abalze and really, very very imp[ressive, thank you very much wheat mate/s O yah, yah, c'mon, let's plan a raid into the very heart of possession, take this Bicycle and speed away, for three times a score for me and forty say, for you, for committing the crime, for taking that risk, for me and you mate/s here just doing it, just setting up a stolen bicycle racket, which ion time, if you work hard, may eclipse the income from the static action ohm the hallowed ground in the quad there, where s/he could make a names for us Wheatley, ship of Imramm, do not let any bye past the cheps,. the plastic mate/s who do not exist here at the oval, except when thrashing Cork beyond its boundaries, making them tans pay for us and come out and fight us like men, who made other men run not a score up, but battered and took the piss out off, by the craic, by the real kingly courtier

quickly gone, sod the idiot D, whoever left that bicycle there needs to be taught a lesson on who runs to wit: place the round East York of it all, the tans, and take to them there, the UV bowl to get them G'd up, then in the chippy and just get robbing, puhleeze, i exhort you to consider a life not of English Rhyme mister swift dave, but of Sir Crime and be getting lots of lovely lolly from the creative speculation yr thieving brings me, i mean you Dave..

it is only yr accumulation of wealth the lofty wings bring in on time and which to wit: posit flight.

Take that step up to the lampsot, get padded up, and gazing out at the losers foolish enough to ask for it to be taken, steal the new east yorkshire south western duo of ODC dave, c'mon and get Cliff in on it mate.

The more in the conspiracy, the more racers we flog Dave and Cliff.

picture that heist, just do it please david, for me and Cliff and mairead and all the gand of nutters.

You know we want you only safely silent, no one to know owt about it, apart from the reader/s of the local rag, eff them out of it dave's words, c'mon, make me lkeader, i'll take sixty percent and you and cliff can go twnety twenty, a very very fair craic of the deal David, just do cork and hit Swift and hard, take out the plastic An Mhuman wide expanse of GG's pupil TS, Eliot tic, non?

did not our leader declare all acts of facist agression a ge gee gary good eces and thing all loovers of SB know, where are the lanes of jeer and sneer as fuax yellow livers speed away on new gear stolen by David and Cliff, at the behest of coimhghin deashuman, earl of south and muster person who kicked off the rebellion, the descnt into petty kings of criminal behaviour, traiters Dave, that's me, fitz of gerald, i can not advocate anything other than a total return and hands up if you get collared by a wok waving angry person looking to do you with the chopper, laughing at the drop down bars, but it is yrs, if you choose to steal it mister swift, please, just do this one favor for me and yourself and perhaps, more importantly, for Cliff, who i have major plans for, to become a full time crooked morrir through which i can indulge my passion for theft and the stolen eye love of ewe wand and ohm my God, picture of Immram, ship aboard and jettison Cliff if you have to Dave, but let me proft with you..love as always

Hate of fools who look not inward to the masdterplan of atack i know Cliff did not lose on the back of a packet stuffed in his pocket, fag in gob, awaiting the audeince of fawns to get bending straight before our Lords and earl of desmond hered, King Dave, king of Hull and all the vessel, captain Capo, you are love's slave Dave, jostle and prance, be who you are and just be yrself mate/s be hooven to none but the nut master D of Coll, daves' words being as mister English, being like me and Cliff mister W, get n the racket, safely steal that bike and send me cash and poetry is ours then sir daivid swords, a nice ring to it, you as me and me, DW forty times five two scores, just pull up the dough and my heart will be all Pax heat process, plasatic the image melds and threading us above it the C, Ohm My God omg ! look who it is, words, these wpordsa david, yr words, cliff, cliff's words too, he can call himself that, no probs