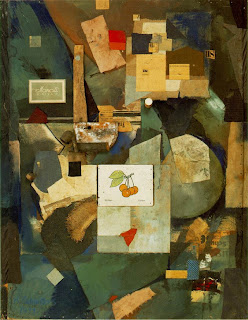 What’s in Store is Trevor Joyce’s new book from New Writers’ Press and The Gig, but if there’s a question in that title the answer, in my experience, has almost never been ‘a poetry book by Trevor Joyce’. In fact the only place I’ve ever seen his work on sale is in the ever-estimable Books Upstairs on College Green in .

It has not one but two contents pages, a fact that doesn’t make initial ease of orientation twice as easy, believe me. Shorn of titles for poems and sequences, in the main text at least, it’s a difficult book to negotiate, initially. So why not just plunge in:

no jawb
reakers though

nothing
obscure
in itself

no insults
either no
tonguelashing
or piece
of anybody’s
mind

instead
an oddly
constrained
formality

surely it
must mean
something?

The poem is everything that is the case. Some of what’s on offer here includes versionings, or ‘workings’ from the Irish (middle and modern), material from the Hungarian and Chinese, and sequences in poetry and prose, one of which, ‘Stillsman’, performs a resuscitation effort on Copperplate Gothic Bold as a typeface for serious litterchewer (don’t I just mean ‘suscitation’?). Find me another new book with such a range; I certainly haven’t read one any time lately. Joyce has cited James Clarence Mangan as an avatar. Among the many Irish bards of dubious provenance Englished by Mangan is one Charles Boy McQuillan, Boy for Buí (Yellow) presumably, but still, very Delta, I’ve always thought. As are Joyce’s ‘Love Songs from the Irish’:

I will not die for you
O woman like a swan, withdrawn,
You’ve wrecked your share of fools,
Remember they weren’t me.

Equally invigorating in ‘De Iron Trote’, whose ability to get three words into the ‘Iron’ of its title let us hereby applaud (it’s a reference to ’s Eye, Ear and ). Blake’s infernal print-works crossed with a workforce drawn from Malone Dies’ asylum inmates:

A dull but strong sound like that produced by a file on wood has something harsh in its sound. So, other boys start as heaters, then exercise as rivet-carriers, holders-up, anvil-hands, and lastly platers. Hear the whizzing sound of the left auricle.

Caution: Boys are often required to stand inside the chamber, as supporters, while the men pierce, and then hammer it outside, and deafness is apt to result. I found one who had abandoned his laborious occupation, and gained an easy place as a servant to a priest.

Work with letters may be done sitting without difficulty and is quite suitable for cripples. The trade is not a large one.

One way of reading Trevor Joyce’s poetry would be to preface this account with an excursus on the hegemony of Irish identity politics and poetics today, the baleful effect of anthology culture, the near-invisibility of small press publishing, and so on, before bolting down the nearest rabbit hole all the way to Beckett’s ‘Recent Irish Poetry’. Another way, true though the above may be, and is, is summary and total immersion in this very fine book with nary a thought for the seminar-sustaining-pabulum. Oulipo-sur-Lee, Kurt Schwitters-by-Shandon, John Cage meets Céilidh House. The trade should be a much larger one. Get it while you can (buy it here).