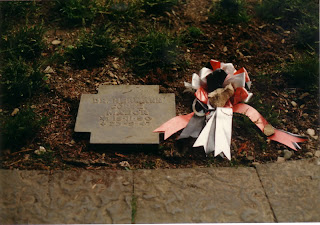 Sitting in the National Library in Dublin yesterday waiting for some old books to turn up at my desk (ah, table service), I whiled my time away catching up with a most unusual item in the annals of recent Irish memoir: Róisín Ní Mheara’s Cé hí Sin Amuigh? This book appeared in 1992, generated a richly-deserved stink, then disappeared (there is no mention of it anymore on its publisher’s website), to the point where the National Library appears to be the only place a reader in search of it now can go.

For those not in the know, Ní Mheara was Francis Stuart’s travelling companion on his extended boy scout adventure in wartime Berlin. She is mentioned briefly in this connection in David O’Donoghue’s Hitler’s Irish Voices. What she has spent the intervening decades doing I can only guess, though under the slightly elongated soubriquet of Róisín Ní Mheara-Vinard she published a book on Irish saints with Four Courts Press in 1994. On the back of her memoir Ciaran Ó Coigligh refers to her having had a hard life, and it must be/have been (is Ní Mheara still alive? she was born in 1918 and I have seen no evidence of her having died) – it must be/have been, I can well appreciate, a draining effort down the decades to keep her stupidity up at quite the levels shown in her memoir. For the chief interest of this book of hers is its unabashed anti-Semitism. The anti-Semite strikes me as the racist’s racist, the racist who is as personally injured and distraught over an omnipresent but invisible ‘they’ as by the Asians down the road or the Roma living on the roundabout: it is the Jew, always the Jew for the anti-Semite, everywhere the Jew, debasing, despoiling, wrecking all around him, the worm at the heart of every rose. And for those who like their anti-Semitic literature to go straight for the jugular, Cé hí Sin Amuigh? does not disappoint.

Her narrative of the war and the Jews goes something like this. In answer to the question what an Irishwoman would be doing in Germany during the war she writes: how could she not stand with the Germans when Germany, like Ireland, is facing open warfare with its oldest enemy (i.e., respectively, the Jews and England)? And what of the camps? The ghettos were the best and in fact only places to store the Jews until a definitive solution to the Jewish problem could be reached, after the interruption of the war. And did people die in the camps? She has seen photographs of piled-up bodies, but believes that Jews were sometimes so keen to board the trains taking them back East where they belonged that passengers died en route, and fell dead from the trains on the platforms. So Germany mistreated its Jews then? On the contrary, Germany was the only country taking the Jewish problem seriously. It repeatedly attempted to push for the so-called Madagascar solution, which readers of Paul de Man may recall for his own contribution to the literature of anti-Semitism, but perfidious Albion was having none of it. The idea was to send all the Jews to Madagascar, where they could presumably tough it out with the local lemur population for control of the banking sector. But as for those stories we hear about Auschwitz, that is all they are: stories. And so on and on, holoucaust denial on denial.

Hermann Goertz features prominently. Goertz was a theatrically useless German spy who arrived in Ireland during the war wearing his Luftwaffe uniform and First World War medals, and was quickly arrested and interned. While in prison he was sent bogus communications from Germany, to which he would then reply with accounts of his activities in Emergency Ireland. But in reality his deluded ravings were of no interest to anyone much, in the larger scheme of things. He died in 1947 and is buried in the German War Cemetery in Glencree. But in Róisín Ní Mheara at least he has/had a loyal keeper of the Nazi flame.

Not the least ignominious thing about Ní Mheara’s book is that it was state-sponsored, as are all Irish-language publications. Hers is an amusing tale, or amusing-seeming, as though she were a character from Roberto Bolaño’s posthumously published novella about obscure Nazi crackpots. Except that she is/was real. And while it gives me pleasure to think her memoir has been all put flushed down the chemical toilet of history, it seems important to hold a specimen of infamy such as Cé hí Sin Amuigh? up to the light once in a while and confront it for the evidence of human vileness and depravity it is. And maybe one worth thinking about the next time anyone who reads this reads Francis Stuart’s Black List Section H.
Posted by puthwuth at 14.9.10

'The anti-Semite strikes me as the racist’s racist, the racist who is as personally injured and distraught over an omnipresent but invisible ‘they’ as by the Asians down the road or the Roma living on the roundabout...'

On the last building site I worked on, in the 1990s, our foreman (who had always seemed an easygoing, likable person) suddenly announced, out of nowhere: 'Hitler did us all a favour.' Weird. He meant it too. Or more recently there was the taxi driver who (when the talk turned to politics) told me, with a note of defiance, that he was voting for the BNP. When I was dumb enough to try to reason with him, he accused me of 'toying' with him: 'They should pull the shutters up!' (though surely he meant 'down'). Totally unhinged, made Travis Bickle seem like Bertrand Russell.

I can't fathom anti-semitism really, or how anyone with a microbe of intelligence (and/or who hasn't been born in some literal or figurative war zone) can fall for such a miserly, miserable delusion. The racist always comes across, ultimately, like a deranged sheep, furiously determined to pull the wool into its own eyes.

Indeed, that lady deserves not to be forgotten - and you might be glad to hear that a biography is on the way. Yes indeed, she's still alive (not kicking). There was a second memoir in 2006, but that went down into the Sceptic Tank of History (which you allude to) even faster than the first. It hasn't such startling things to say, but if you're really interested in some of what she's been up to, and what company she was keeping along the way, check out "I gcéin is i gcóngar" (Armagh 2006)!

Good post David. The casual attitude to WW2, the Nazis and the holocaust in Ireland is shocking; there's a statue of Sean Russell in Fairview Park ffs. However much it is cloaked as plain ignorance, anti-Semitism seems deeply rooted in the parochial theocratic nationalism that our little faux republic is based on.

A biography of this woman is on the way (2013 or 2014). I'm glad to see others have picked up on her and her views. The first memoir caused some small uproar, the second received no notice at all, and her journalism (1977-1983) was only noted in Irish-language circles: there was holocaust denial there, too.