Silence and the Gaeltacht 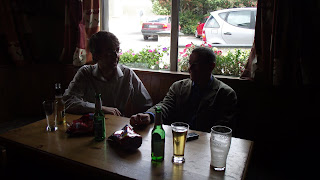 ‘God be with you o noble person, I hear that you have the English on you. I do be speaking the language a little myself.’

The above is a sentence, it strikes me, I’m not in the habit of using on random Anglophone passers-by. Yet, social klutz though I am, its Irish-language equivalent is one I’ve tried on a fair few people over the years, most recently on the baffled passenger beside me on an Aer Lingus flight when I noticed a copy of Foinse in his hands. He informed me, as a non-Irish-speaking Glaswegian, that this publication now comes free with the Irish Independent, which shows how out of touch I am. But when I went to the Donegal Gaeltacht I noticed how strangely different the dynamic was. Irish-speakers can be hard to track down in Glencolumbkille, but when I did see some – a group of rowdily fluent teenagers sitting at the bar in Roarty’s, a very red-faced and surly-looking farmer – it dawned on me how odd it would seem if I approached them and struck up a conversation for no better reason than to go through the phatic motions so common when Gaeilgeoirí meet outside the Gaeltacht (‘I notice that would be the Irish you are talking’). You speak Irish then, they would have thought – and? Why should I care?! So I just let them me and continued nursing my pint. I mean, if it was Irish-language conversations I wanted I could just have talked to that guy on the right in the photo above (perhaps he’ll let me post his own (excellent) Irish haiku here too – it’s a companion piece to the one I posted the other day). A defining aspect of Gaeltacht life, I thus feel I’ve understood, is being among people you don’t, rather than do speak to in Irish. A defining condition of the Gaeltacht, in other words, is silence. In Irish.

And by way of a pedantic ps, I have also been wondering about the feasibility of adding an atheist spin to the Irish for ‘hello’, Dia dhuit, ‘god be with you’. Dia (nil sé ann) dhuit. Any takers? Please feel free to salute me thus the next time you see me sipping a Smitwicks in Roarty’s. Or rather, think about it for a minute before wisely deciding to sit there in silence instead. This is the Gaeltacht for (there is no) God’s sake, where do you think you are – Prague? Hull?!
Posted by puthwuth at 25.8.10

Or you could try 'Nialas mór dhuit'.

I dunno if you've seen the RTE sketch show Your Bad Self, Dave, but they have a hilarious series of set-ups that all follow the same trajectory.

One of the people in the scene is in danger of being, or has just been, exposed as a liar - for example: someone who has told their boss they can speak French, is introduced to a French person by their boss, as they are playing golf. To get out of this embaressing faux pas, two ghost-like aran sweated, flat-capped gaelgoir suddenly appear (as if by magic) and one of 'em says silence for the singer please, silence for the song, as the other one starts warbling in Irish and as the boss and French person begin to try and talk over this unexpected interuption, the non-singing gaelgoir repeats the catchphrase - silence for the singer please, silence for the song - naturally, because it is a holy language; and the person in the scene in danger of being exposed as a fraud, uses this intervention to make their getaway.

I've been looking for an example on youtube but can't find any; though there are a few other funnies from this show, Your Bad Self, the first I've watched since Naked Camera, that is original and funny; unlike the rest of the self-congratulatory RET windbags all agreeing how fucking great they are for being soo rich, famous and caring about the, you know, us, the plebs.

Think Turdfogie and the faux cultural wankathon on the first 'amazing' day last week, reported in the rags as if it was summat far, far deeper than a well connected FFer waffling shite in the morning, doing the important business of being a contemporary D4 custodian of the aul famine memories.

Have a fucking guess.