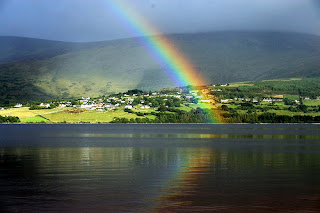 The extract I quoted from Ned Kelly’s Jerilderie Letter lately put me in mind of an equally rough and ready folk autobiography, that of William Hanbidge, a native of Tinnahinch in the Glen of Imaal, Co. Wicklow, who lived from 1813 to 1909. He belonged to a society for the ‘discountenancing’ of vice, which always conjured images, for me, of a nonagenarian Quaker dropping into his local pub to gurn threateningly at the local drunk. Anyway, here is Hanbidge’s account of the descent into sin of the (Stratford, Co. Wicklow that is). Blogger isn’t too hot on mid-sentence gaps, quite a few of which occur in the original text, and which I’ve had to remove here. Please supply mentally, mindful of the high regard in which the early twentieth-century Projectivist community of held Hanbidge’s writing (his use of the full stop is also somewhat fitful):

The scenes to be seen of a Saturday night and on Sundays were awful.

There were always a wordy warfare carried on between the country and town lads for the country lads when they saw the weavers would shout A dish of kailcannon and an iron spoon would make any calico weaver jump over his loom with other scurrilous epithets which the others resented very much.

All used to meet at a low public house about half a mile from the town on Saturday evenings and Sundays the sights which followed I cannot describe.

After a time the downfall of the town began.

The slated houses which they lived in soon fell into ruin.

All the remaining employers had to seek work in or and others such as shoemarks &c.

Those in the mood for more will be pleased to know that W.J. McCormack edited Hanbidge's memoirs for UCD Press a few years back (scroll down a bit). The above picture, which I found here, is not of Stratford but nearby Valleymount. The combination of Wicklow place-names and water reminds me of a bridge I encountered there once called Pennycomequick Bridge. Or am I making that up? I can't be sure.

The area next to the train station in Plymouth is called Pennycomequick. Some link there, maybe?