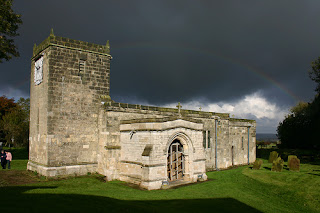 North I went and west and north again: to the , ’ airbubble alternative to the Moors and the Dales above and beyond.

Altitude in these parts cannot escape the taint of irresponsibility, every molehill tumbling straight back down again in runnels and cuttings of access roads, the dips in the road where the horizontal loses its footing.

Here worked J.R. Mortimer, disturber of dust and fossicker in graves, to produce his Forty Years Researches in British and Saxon Burial Mounds of East Yorkshire. Here too, or therein, worked Peter Riley, on his Excavations, his excavations of excavations, or burials within burials, text upon text:

the body in its final commerce: love and despair for a completed memory or spoken heart /enclosed in a small inner dome of grey/drab-coloured [river-bed] clay, brought from some distance and folded in, So my journey ended moulded in the substance of arrival I depart and a fire over the dome and a final tumulus of local topsoil benign memorial where the heart is brought to witness the exchange: death for life, absence for pain, double-sealed, signed and delivered— under all that press released to articulate its long silence, long descended • tensed wing / spread fan / drumming over the hill.

The hillsides flecked with Aberdeen Anguses, perhaps a seasonal choice, to offset the dripping and dreepings of the hedgerows and ditches. Also a race horse, as the warning on the gate announces, a flighty mare. Mares in heat swishing their vulvas in a state of excitement are said to be ‘winking’. An English ditch, do not forget, inverts the Irish usage. Watt falls in a ditch, the better to hear the mixed chorus, but soon rises. Repeated stirrings in the undergrowth, at ground level, the busy footlings of vole or field mouse. A pocket-sized raptor strokes the air overhead, caressing the trigger and whoosh of its plunge. A woman in a small shop is bewildered by the addition of 99 and 50 pence: could it be two pounds? While the simple old man stood awaiting his ice cream, his ice cream he sat and ate in the car, his carer nowhere in sight. ‘Life Before TV’, announced the children’s tapestry in the village church, a distant prospect indeed. Then over the hill and away. Delete the photos in trying to upload them and filch one off flickr instead. A landscape of the lost. But its pebbles and cowpats are stuck in my sole, meshed and compacted. And one more time the ‘tensed wing / spread fan / drumming over the hill.’