The Silk of the Seas and the Arctic Flowers 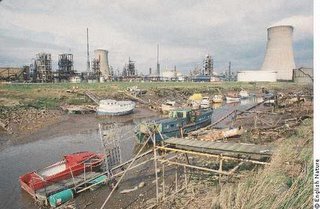 The last drop of petrol always like the last drop of pee, shaken out and going to waste. King Billy on his steed, over the gents’: our great deliverer; stirrupless Caesar of the all-night disco bar and two-for-one offer on the alcopops. It was here I felt the call of the river, the need to look on its vicious majesty and be comforted once more. So I drove, I found the station playing the one pop song in the world able to save us and drove. Look at that sun in your eyes: take it and break it and leave it in fragments spilling the daylight into the earth. On the traffic island lives a white-tailed rabbit who will marry the owl and the pussycat and wave them off to sea, to a fly-past from the Airfix factory down the road and corks popped at the cod liver oil place beyond that. You want hard, I’ll give you hard; want letters home about bed bugs and scurvy, that’s what you’ll have; want can’t be bothered meet me out here after closing time in a party hat and fake nose. This afternoon the sky has decided to take the Zeebrugge ferry and won’t be returning, dragging the waders and ducks behind it. That’s another half-dozen off my twitcher’s list: see them once, I tell myself, then let them get the hell out, it’s not like I want them hanging around, cluttering up the place, and off they go, wheeling and screaming. A half hour of this and I’ve sunk up to my binoculars in this quagmire, and are you trying to pull me out or offering to come down with me, you’ll have to shout louder than that if this is going to make any sense. Or bundle me into the boot, release the bawdy handbrake’s grip and leave me to smother in the mudbanks’ glutinous kiss. So here we are then, here I stand and gaze on the river and know I am right, Midnight and Fugly the Fort Paull owls whispering one in each ear, telling me so. Take my hand and close the boot with me from inside: here in the dark, the warm, the wet, never more certain all our lives, of what I don’t know, I’ve no idea, but something, something, certain, certain.
Posted by puthwuth at 14.2.06