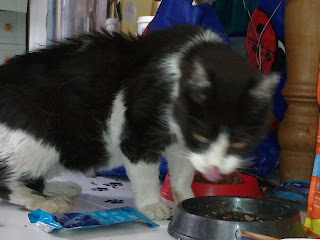 On youtube I watch a short ‘Cat Head Theatre’ clip of Hamlet, in which an animated feline gives a passable performance as the Prince of Denmark. Guildenstern and Rosencrantz also feature, alternating between speaking their lines and chasing flies in the background. Cats are a large part of my life, and if called on to create a Cat Head Theatre clip of my own I know all too well both the play and the felines to which I would turn. The play would be Waiting for Godot and in the role of Vladimir I would cast Percy, sage and sleek, while Estragon would be his heavier and earthier helpmeet-brother Sam. Pozzo would be recreated (from beyond the grave) by our neighbours’ cat Rimmel, a large-bottomed and often bad-tempered beast still to be seen on Google Earth, where she perches on a recycling bin outside our front door. Lucky would be Hobo, a feline who died at the estimated age of 25 in 2011, but who up to very shortly before his death was still coming in through the flap to devour the treats and pouches with which he would be ceremoniously presented, for how could we refuse him anything, estimable old gent that he was. There was something of the toilet brush about his appearance in later life, it must be said, and to touch his fur was to be left with a peculiar amber-like residue, to be no more specific than that. The boy can be a cross-dressed Fifi, Rimmel’s equally fat-arsed replacement. As for Godot, he is Snowy, otherwise, Mr White, who sits in another neighbour’s window, stalks the tenfoot, appears suddenly and shockingly on downstairs windowsills, and on rare and treasured occasions appears in the kitchen. Being deaf, Mr White inhabits, I imagine, a profoundly solitary and private universe. He is perhaps the most elusively beautiful creature on the street. I go to the window and a cat is strolling among the bins. I go to the garden and another is lolling on the bench. I leave the house and another is on my step, and yet another sitting in a bush. Two of the cats I mentioned above are dead but this remains their place much more than mine. Hull will not have me alive or dead, but Hull is all these cats will ever need. For which reason it occurs to me there may be a problem with my choice of Waiting for Godot after all: these cats may appear to be waiting for something, but there is nothing they lack, nothing that could make their lives any more sheerly replete than they are.
Posted by puthwuth at 21.12.11

Lovely post. Pinter plays are maybe another good option for a feline thespian, but the director would have to be careful about the length of their paws...