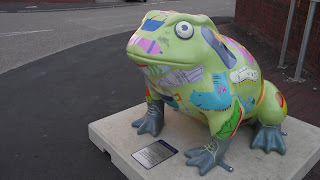 This must be a sequel to Thomas Mann's book, Toad in Venedig...

They had fibreglass Art objects, large bibelots (nicked tha from ye Daithi), dotted around Liverpool during its time as European City of Culture in 2008. Lambananas, which you will see at the link (if you go), are a cross between a lamb and a banana. Technically speaking, they are Super Lamb Bananas, over six-foot of durable art-work, and money very well spent; they really get across Liverpool's whacky banana-lamb essence. Srsly.

An in-joke with myself. Franz Wright the poet-son of the poet Franz Wright (I think) wrote the best contemporary fuelled rage-poem about the Gulf catastrophe, that appeared on the Living Waters website (the only real poem, of the ones I've read, there, I thought.

He has no qualms and doesn't give a 'fuck' about telling am-po-biz dabblers and doggerelists, that what they write is shit, very entertainingly so, on Scarriet blog where Thomas Brady (real name Thomas Graves) the conspiracy theorist, whose one itch poetic instinct espends its entire energy, not on connecting to ogam, but proving that the first Transcendentalist poets, made a diabolical pact with themselves that their scions would one day rule the whole of American po-biz, and run the MFA courses from beyond the grave.

Totally bonkers, and Franz Wright has the odd rant effing and blinding at the 'losers' and 'never were has beens', like, he (and me if I'm honest) reckons Brady-Graves is; and it is in homage to him, I took the vow to have a laugh as Franz Bonkers.

For the record Desmond, his father was the poet James Wright, whose work I prefer.

The best one, in the guise of Larkin himself, is on the ground floor of Princes Quay