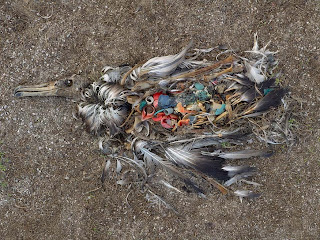 Ses ailes de géant l’êmpechent de marcher, but as for the contents of the albatross’s stomach...

I was inspired to look up Chris Jordan’s work by a similar picture in the Guardian the other day. He has been documenting the effects on albatrosses of the plastic they pick up out at sea and feed to their young, believing it to be food.

An obituary for Claude Lévi-Strauss the other day described his philosophy of life as one of ‘serene pessimism’, but how to express this serenely? Life is shit. For most people and creatures, at most times, life is shit. As Beckett’s ill-fated attempt at a stage character in Mary Manning Howe’s play Youth’s the Season put it: ‘My conception of the universe is a huge head with pus-exuding scabs – entirely revolting.’ This is my philosophy of life too.

Cheer up, Brian. You know what they say:

Life's a piece of shit
When you look at it... Etc.

Life is shit? I have some sympathy with that gross simplification (no less flip than the flip-side: 'life is bliss'). But I'd hesitate before declaring it, even as a form of self-mockery. Is my life shit? Is yours? Perhaps yours really is. But are you in a position to empathise with those whose existence might be summarised thus (the victims crowd the canvas far quicker than you can summon their myriad tortures: famine, disease, poverty, my mother's arthritis 'singing in her bones', etc., etc., etc.).

And perhaps, despite it all, they would not thank you for such a 'philosophy' (more of a motto). Not that you'd wish to be thanked, of course.

Life is what you make it, ergo life is indeed ,as you say, shite. It has many shades, apparently seven can be kicked out of a single person.