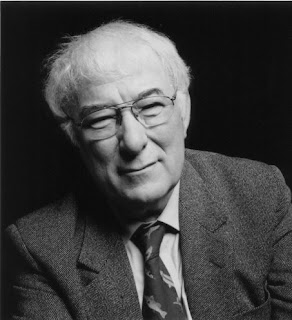 Anyone can make a mistake. Anyone, asked to write a book review, can fail to reach Johnsonian heights of deathless prose. But perhaps it takes an Oxford don writing in the Sunday Times to reach the level of cretinism displayed by John Carey, writing about Dennis O’Driscoll’s volume of interviews with Seamus Heaney:

The America he came to know in the 1980s, as a Professor in California and in Harvard, seemed to him to be living in a ‘centrally heated daydream’, epitomized by the poetry of John Ashbery, which appealed to a middle-class readership, insulated from the cold blast of world poverty, and ‘on the move between its shopping malls and its missile silos.’

Good old Ashbery, smoking jacket and all, with his versified senior common-room tales and ever-dependable way with a triolet. Has John Carey ever read Ashbery? How bothered should we be if he hasn’t? Criticism on this level renders praise and dispraise equally meaningless. If this is poetry reviewing today, abolish it now, someone, please.
Posted by puthwuth at 14.12.08

It looks like he's just read and regurgitated the arc of the narrative Heaney and O'Driscoll masterfully assembled. "An autobiography by another name" Carey calls it and the only dig he gets in is describing Dennis's questioning style:

"O’Driscoll comes across as prissily academic, cracking dry little jokes and officiously reminding Heaney of the impolite things some people have said about his poetry."

And then pelts helter skelter to recount in a short precis, what we already know of his life, neutral in all respects. At least he got his fee.

I am three quarters of the way through it and it is great, pleanty of opportunities to learn and appropriate. Find common ground in the artistic and personal, look deeper into the Heaney head and heart and compare score cards of the individual heats.

As you know Dave, Heaney is the one I have as the bar to reach, and his eloquence has been exercised all his life. He has never been blocked and the bare bones of it I get, is that he is happy and a gasser who loves to laugh, continually going past the levels he set, via reading and experience of life.

Unlike the rest of the major poets in the canon, I got the sense that he is the first to state a claim which is more opt in then get lost. The Eliot-Leavis axiom which seels to have a heirarchy of lessers and highers, is wonderfully absent in Heaney, as he doesn't realy on the imperial mechanism of an absolute, in the form of being hectorial of issuing dictums - which is really the exterior manifestation in print, of the Divin Right of Kings complex most poets prior to the this one, had as their archetype.

The fact of Heaney's background, him being one of the first from the camp of *other*, who hit big, means he is more generous and articulates the complexities of things in a far more nuanced way, more human. He doesn't actively display his prejudice in the way many poets writing in English do, as he is not from the tradition of snoots and nobs, as he says in response to O'Driscoll inviting him to position himself on Yeats side of the fence. He says - in a very memorable bit, about how his stars came through the half-door onto a mud floor with a hollow scoop in the corner the cat drank its *monn-lit milk* from.

I discern a unique, affirmational template for poetical conduct in Heaney which no other poet has shown. One in which the mud and majesty combine in a natural torrent, and the drawing from a full spectrum of experience and learning, an exemplar for the future. For too long we have had oxbridge eduacted winners with all the advantages, the base of the english language canon, and the problem is, they get feted from a very early age in a privileged bubble and, though starting out well enough in their juvenelia, as the hands of time spool around the clock, they get blocked and bitter, until reaching the autumn period with their best days far behind and bitter and little Englanders who have a swift and intense bloom in the hot-house glare of the literature pages for a decade or so, before the new lot of snoots come along picking off all the plum numbers straght after winning the Newdigate.

This is a simple and somewhat negative presentation of the general thesis, but Heaney is not encumbered with the pettiness which privilge from an early age can inculcate in the formative years.

And like Yeats, he has been operating out there in an order all his own, which no other poet has reached. Ard Ollamh territory, and like Godfrey O'Daly, the 14C fili is remebered as being one of the top three of the 1200 yr Gaelic tradition, Heaney I think has secured his spot.

And it is clearly hard work that got him out there, being lucky and all the rest of it, but primarily, a love for poetry, shining out of him in everything he does. He is like U2 in relation to the rest of his competition. How many from their late 70's when the four Dubliners set out, are still drawing millions and at the top of their game articstically?

They all fell by the wayside and now U2 are in a league of their own, same as Heaney.

And I think one of the reasons he got past his oxbridge competition and over the long haul, as a first of his ilk, native Irish reaching top table across the grove - is he relied on his own mind. There is a whole Honour culture in the UK, which, though someone from Heaney's (and my own) background will never understand, many people are only to happy to have this system as a scaffold on which they can use as a leg up to success, even though the evidence points to the contrary. That accepting honours, will not propell us deeper into the well of sefl and learning in the mind. There is only Betcheman I can think of who did well on it, though light verse was more his thing, rather than searching the midnight of the soul and dredguing back into poetry the antidiluveal gubbings and mulch.

So we who do not bend the knee, though in the short term, face a longer slog, in the marathon have a good chance, if we stay the course, as people respect others who make it on their own without buying into the divine right of Kings, unless it means we are on the shortlist for annointment. And as poetic knowledge can only come from ourselves, from within, then it is pretty pointless believing we need permission from another, to feel regal in ourself. The most regal state of enobling, we achieve incrementally. We write a good poem, another a prose, give a good reading, and slowly we ascend from ploughboy to a King of I, our own inner realm of conscience and clarity, individual and imagination, if we work hard enough.

But most of all, what I detect is an effulgence and enagement which I have had a great time imitating over the last day or two online.

And it is not the sort of stuff to be getting a person jealous. To read it and pack away our own aspirations, as it offers us 500 pages of the psuedo-semi personal-public 50/50 mask that is the Heaney Business. O'Driscoll joshes at the beginning about his subject not beleiving himself he was born on the farm in Mossbawn in 1939, such is the cultural and global phenomena that is your man.

But we get a view which joins up the lectures and poetry, insights and glimpses into his compositional frame of being, and all this slap and slout, two and three alitterative adjectival announcements, are the jiggle and jump that is the shared template I mentioned earlier, as Shay says in an act of joining up the dots.

Sund has a buried sense and you can make up any similar sounding words, and some reason will pop in there eventually, if you just keep blundering about. Buttons and blebs, the stick out and press on. It is a game of chance and intelligence, combining and combing, collecting and conveying, all that sort of soundy stuff Shay does so well, and we see others, for the last forty years - imitating.

He has been at the top so long, we are unaware how total his grip is. Most English language poetry today we are flogged, is similar to Yeats in his time. All the big names in his day who were second and third hand imitationalists, who are no not read, are analogous to the top crop we have now, in whose shadow they have to plug on and play that game, if that's the pne they chose as a route to becoming the best.

But no one can beat the mossbawn magus at his own game, so it is a tough call for most poets - what do they do to not fall in top the trap of becoming run of the mill poets writing a cloney type of product?

So what he taught me here, is a deppening of trust in the imaginative ability in the face of a blank page and unwritten statement. That we can mix the matches and cross stich of what comes out, all of a piece and looking higgle dee piggle dee, but underneath, as I am doing now - some light wraps it all together and it makes its own sense, and we let go. And if it takes on the second wind, finds the right uplift and underlying breath of flight, then we are home and dry, hoking and wholly on one's own tone, noting the sum of lettrs that make the word, Faith.

I'm into the groove now, and so, the rosary, decades he spent on that religious scaffold which gave his mother succor and strength, his first launch pad to the otherworldly event that poetry can be. He just used his head and imagination and relies on eloquence
says at the beginning,

The coolest drop, the one liner that says it all, is when O'Driscoll asks about Seeing Things getting a bad review by Desmond Fennell in the Irish Times in 1991. He asks if Heaney knew him and Heaney says:

"Oh yes. We'd met on quite a few occassions; in fat,I'd once driven him to Derry to attend the first night of a Field Day play in the Guildhall. He'd even telephoned me a couple of times at home to invite me out for a drink. Maybe I shouold have accepted."

Says it all, and gives a poet the first lesson. Do not bend the knee. If you are the best, it is others who will want to be your mate.