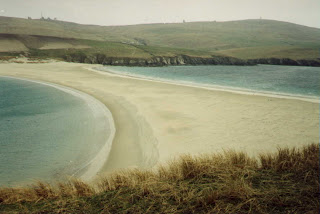 ‘Broal’, ‘daed-traa’, ‘gimmer’, ‘loopick’, ‘mootie’: just some of the Shetland words listed by Jen Hadfield at the end of her Nigh-No-Place. I might fancy I hear the echo of the Irish trá in daed-traa but I assume not, since Gaelic has not never been spoken on Shetland, which in any case was Norwegian until the fifteenth century. Norn was still spoken in Shetland, on Unst and Foula, as late as the nineteenth century, and its influence on the English spoken there today was the subject of a radio programme by Kathleen Jamie a while back. Wikipedia gives the following text of the Our Father in Shetland Norn:

It’s been pretty much the year of Myles na gCopaleen in this household, so far, so imagine how pleased I was to find my interest in Norn acquire a Mylesian dimension, in the form of the Shetland words of Nornish extraction listed by Hugh MacDiarmid in that charming piece of hack-work, The Islands of Scotland. Are these words genuine? Cue a research trip, coming up, oh any day now, to find a thistly old crofter still using them in conversation with his one and only companion, a three-legged pig called Morag (some animals are too good to eat all at once). MacDiarmid gives three sets of words, the first of which refers to ‘sounds made by a cow’:

Brol – the ordinary, natural sound. [No wait, I just said Jen Hadfield uses this one!]
Gul-brol – an emphatic or excited brol.
Skrol – a frightened sound.
Umble – a throat sound, as if choking.
Njoag – a nasal sound.
Drund – a moaning sound.

The second set is of words ‘applicable to the wind’:

In one of Myles’s 1940s columns discussed at the centenary conference in his honour in Vienna the other week the subject comes up of animals’ names in different languages: ‘If an Irish terrier is called Jack, is his true name Seán?’, he asks. ‘Is he a shoneen-dog if he doesn’t respond to “Seán”?’ Elsewhere he ponders whether Irish-speakers and English-speakers share identical silences, as though even the absence of words needs to be translated between languages. All very appropriately Wittgensteinian for Vienna, I thought.

Words coming in and going out of the language have been in the news of late, with lots of twitter users parading their undying love of the word ‘aerodrome’, which appears to be have been given the heave-ho by ‘sexting’ or some such barbarous neologism. Where neologisms are concerned we tend to start with need, then an existing but unwieldy way of expressing it, then the invented contraction. How many times, I wonder, did the Earl of Sandwich, refusing to break off gambling for his tea, call for his favourite piece of sweetmeat betwixt two slices of bread before the Garrick Club’s resident Baldrick suggested calling it something else instead, such as Sandwich. But much depends on the degree of felt need, does it not. Consider what manner of life you’d need to be living before it occurred to you to invent the following words, list three from MacDiarmid, sea-related this time:

Di – a wave.
Soal – swell occasioned by a breeze.
Tove – a short, cross, heavy sea.
Hak – broken water.
Burrik – a sharp sea, or ‘tide lumps’.
Bod – a heavy wave breaking on the shore.
Brim – sound of sea breaking on the shore, especially when land could not be seen, as in a fog.
Brim-fooster – sea breaking on a sunken reef.
Faxin – a baa threatening to break.
Overskund or Ootrug – broken or spent water or backwash.
Gruttik – ebb-tide.
Grimster – ebb during spring tide.
Draag – the drift of a current.
Sokin or Saagin – short period of still water between tides.
Snaar – a turn or whirl in a current.
Roost – a rapid, flowing current.
Haf – the outer fishing ground.
Klak – inshore fishing ground.
Fram – to seaward.

What the Norn for ‘sexting’ is, however, I fear we will never now. Though I did learn once from the Portadown News that the Ulster-Scots for paedophile is ‘wean-worrier’.